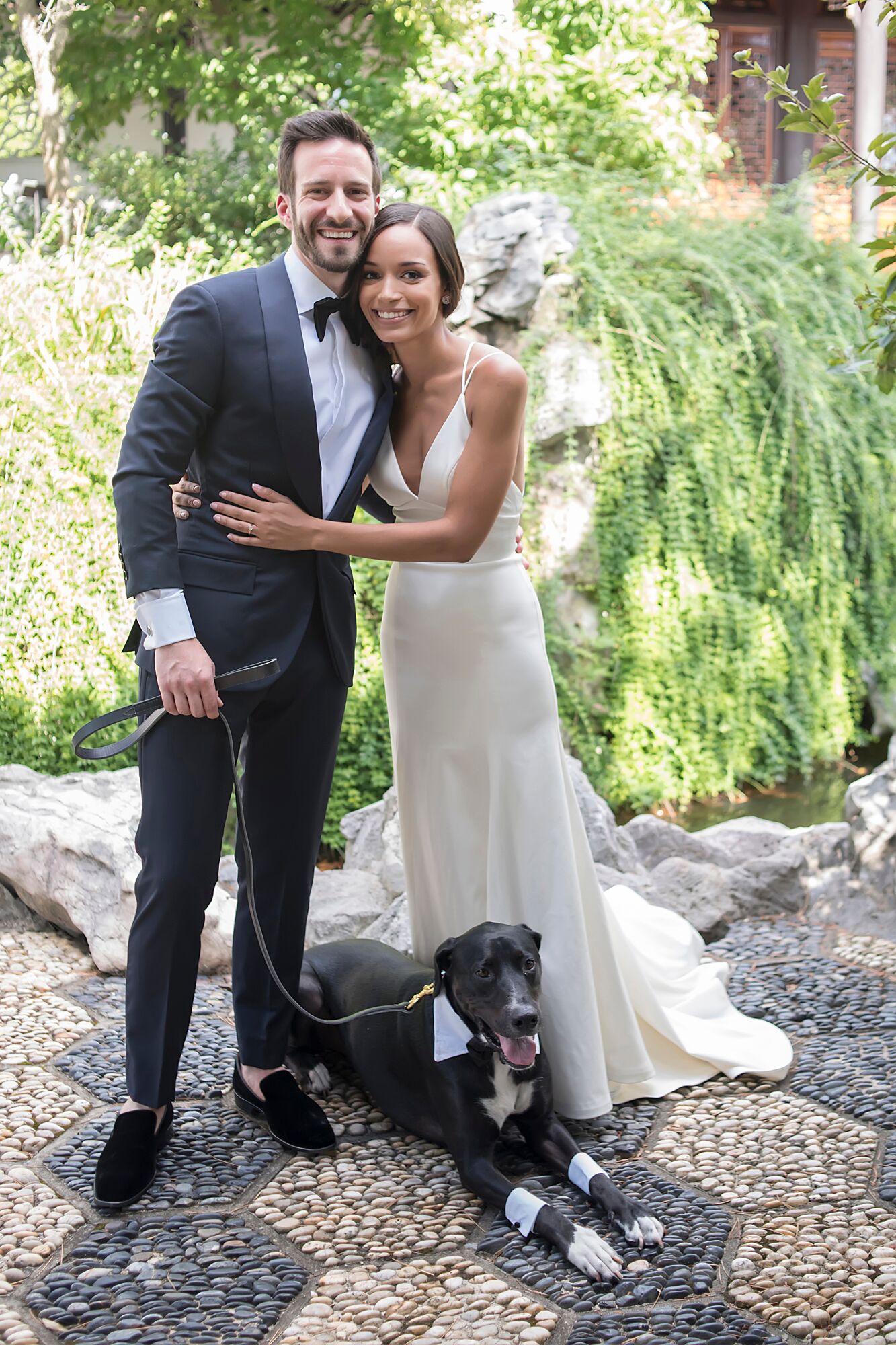 As soon as Grace and Lee finished their tour of the Celebrate Snug Harbor grounds, they knew they had found the best location for their wedding. The ethereal Tuscan Garden was the ideal place to hold the marriage ceremony, followed by a reception of their loved ones under the elegant architecture of the Upper Great Hall. 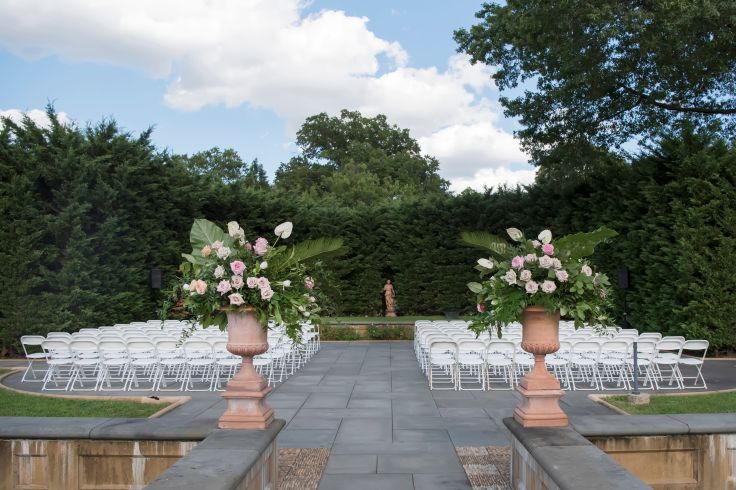 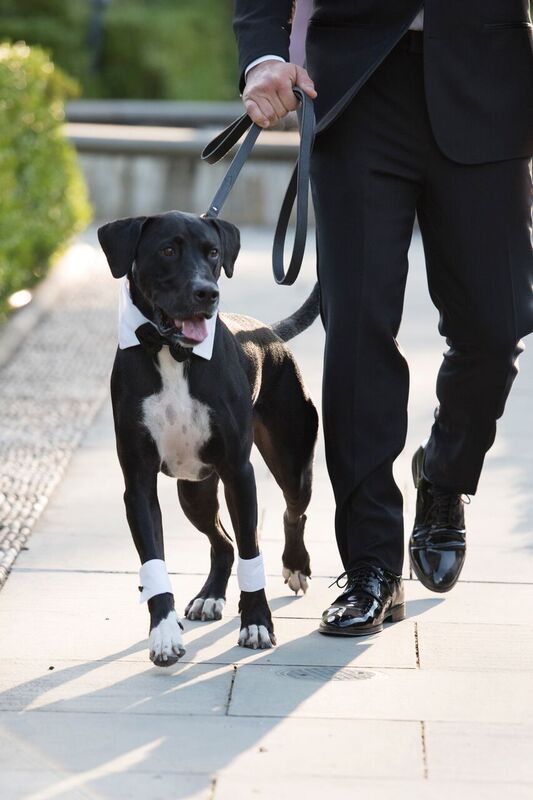 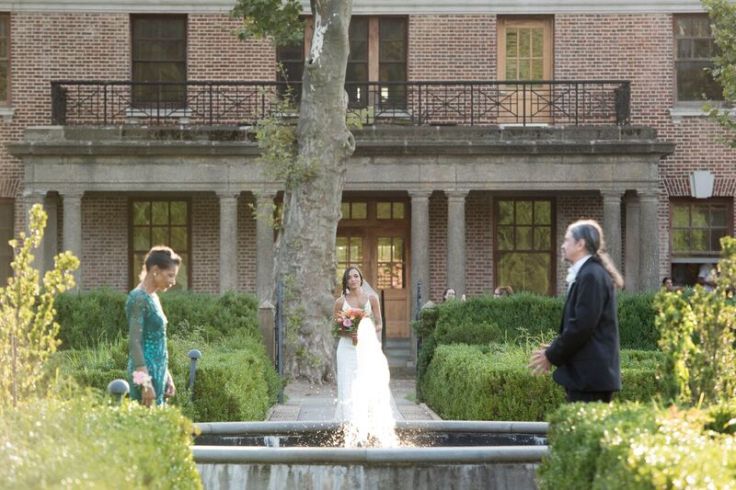 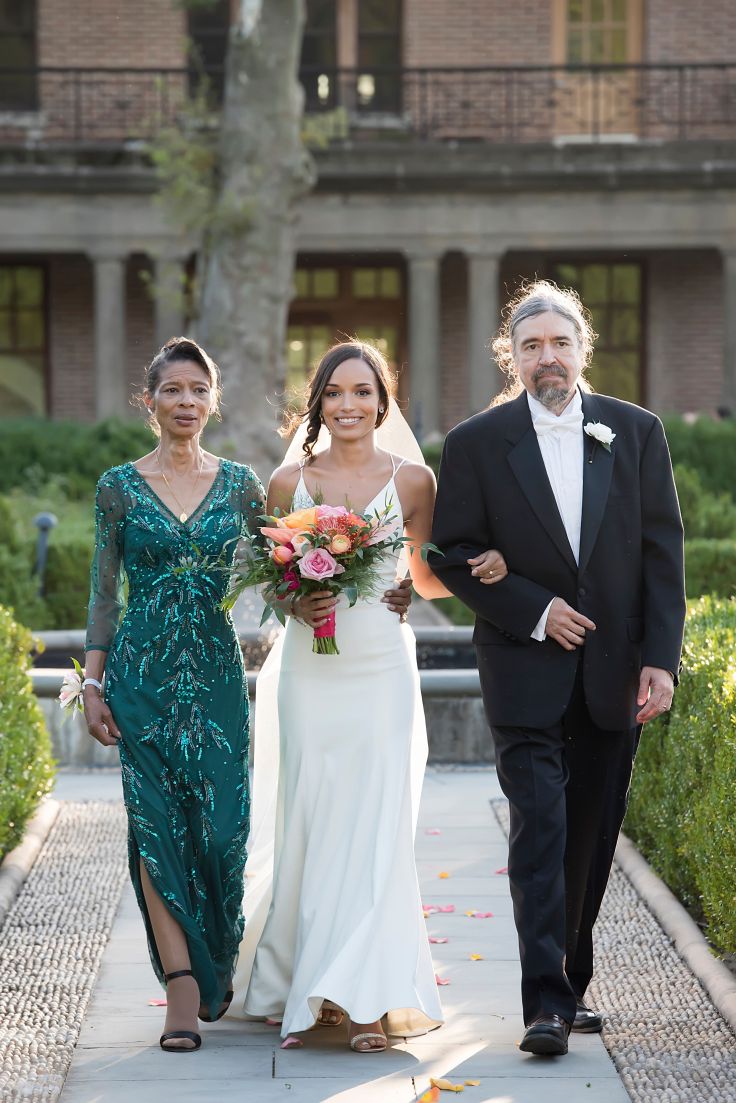 The gorgeous garden service was officiated by one of Lee’s best friends and groomsman. 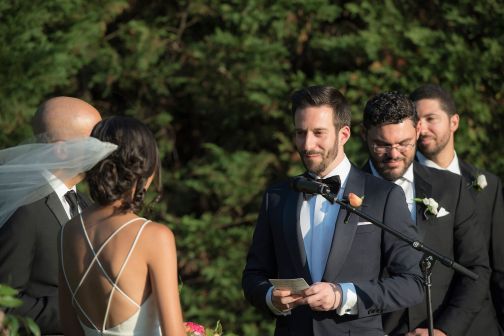 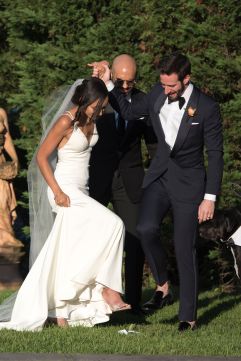 The couple’s dog, Enzo, was also able to be present to witness his best friends say, “I Do”.

The nuptials were followed by an equally whimsical, well-appointed outdoor cocktail hour for guests, allowing Grace and Lee to sneak off with their photographer, Adena from Studio A Images.

Their first moments as husband and wife were spent staring lovingly at once another amidst the romantic, secret-garden scenery of the Snug Harbor grounds. 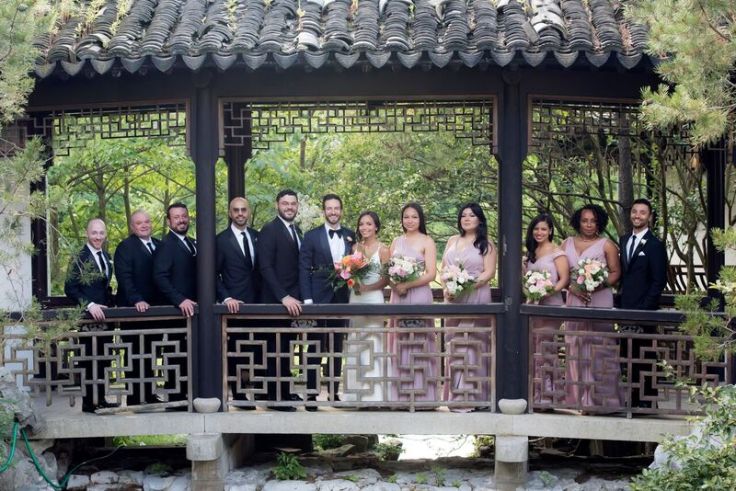 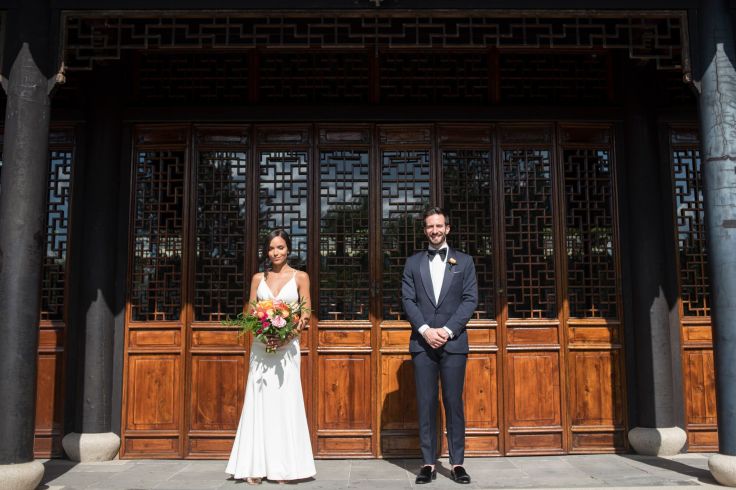 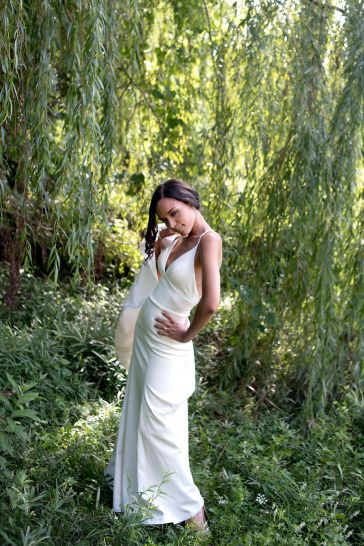 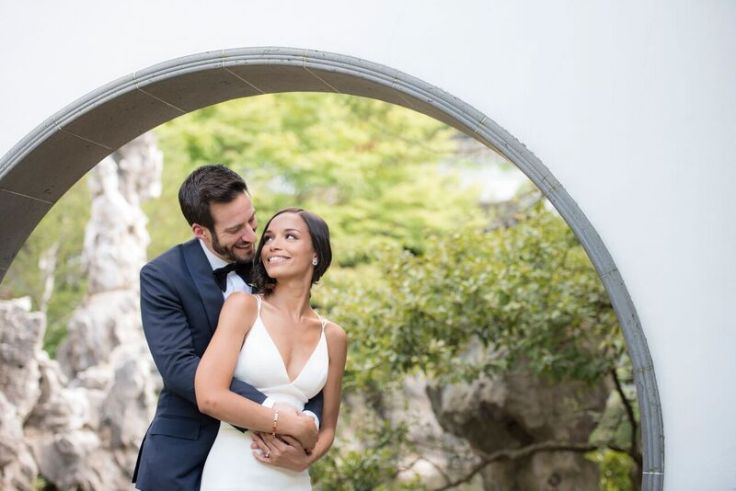 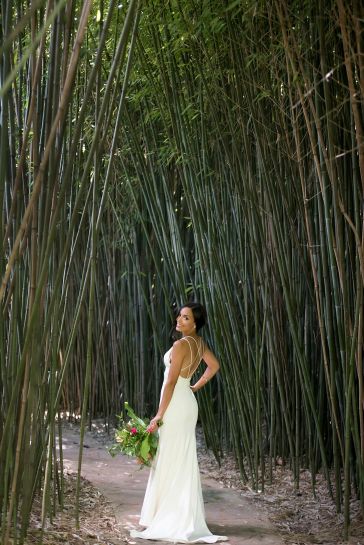 Once the photo session had ended, it was time to celebrate this momentous day with family and friends. Everyone gathered in the Upper Great Hall, surrounded by arrangements bursting with lush blooms in a soft palette of dusty rose, creamy whites and emerald green.

Numerous display tables dotted the room, embracing partygoers with colorful photographic memories of their times with Grace and Lee. Guests were encouraged to take the photos home, along with a deliciously scented candle, lovingly home made by Grace’s sister for the occasion. 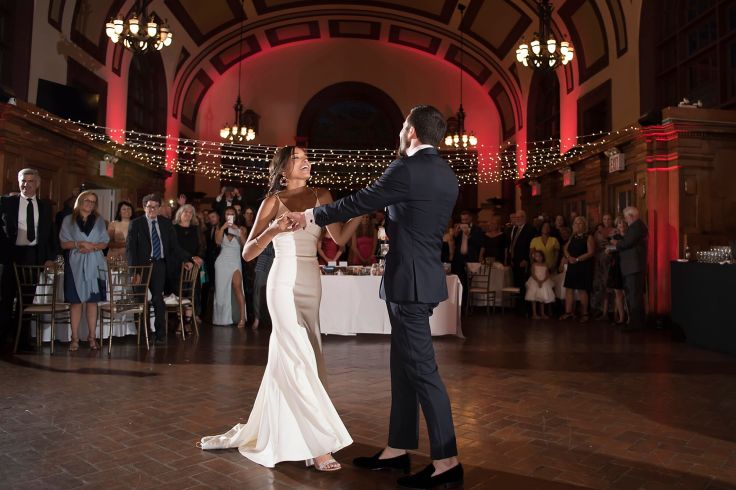 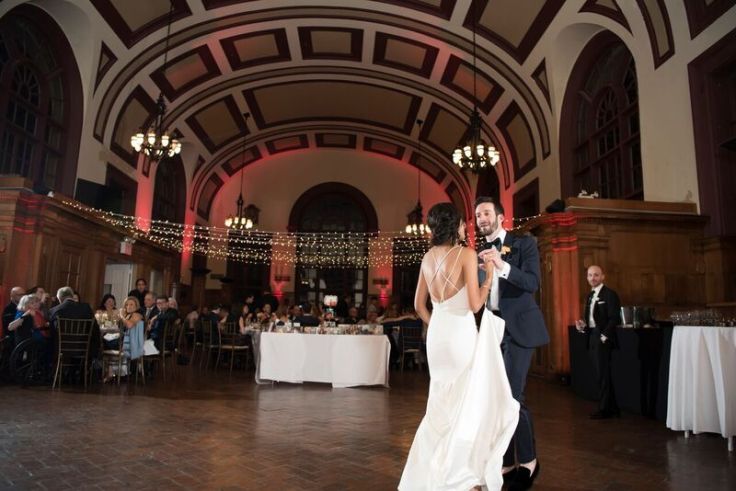 The festivities continued well into the night, fueled by scrumptious treats including an abundant ice cream sundae bar and Denino’s Pizza, which was served at the stroke of midnight.

Family and friends grooved to the beat of Grace and Lee’s DJ, who happened to be the very first friend Lee had made in Amsterdam over 15 years prior. At the center of the revelry was Grace and Lee, having the time of their lives at this epic dance party held in their honor. 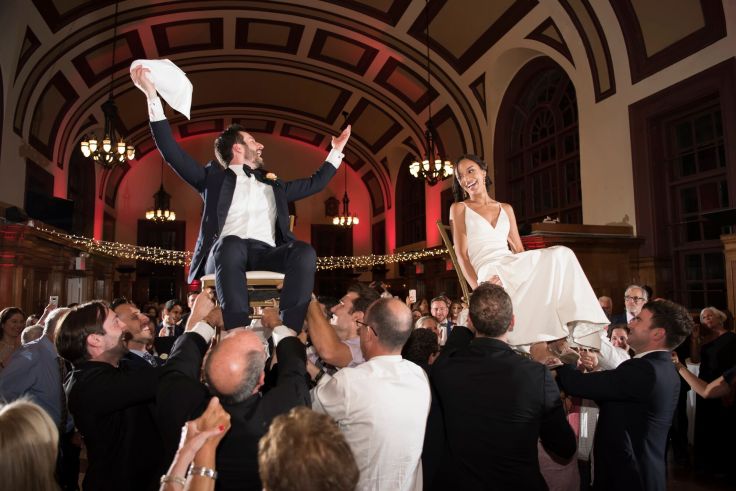 A special thank you to Studio A Images for so expertly capturing this day. We are so lucky to have such delightful couples as Grace and Lee to work with at Celebrate Snug Harbor!

Flowers – https://www.aureateflorals.com/  The florist is a friend of Lee’s from high school.

This is a text widget, which allows you to add text or HTML to your sidebar. You can use them to display text, links, images, HTML, or a combination of these. Edit them in the Widget section of the Customizer.